The vexing question of Brexit

Macro Man has refrained from commenting too much thus far on the Brexit issue because he wanted to do a bit of research and gather his thoughts.   On the surface, the issue would appear to be right in his wheelhouse: a key public policy debate in his long-time country of residence that could fundamentally alter Britain's place in Europe and the world, politically, economically, and financially.  However, it is his strong belief that he has no edge in what he would generally characterize as his bread-and-butter modus operandi of figuring out the outcome and market implications of the referendum.  There is simply too much uncertainty to have a strong view on the outcome of the vote and especially the medium term implication for Britain vis-a-vis its reshaped relationship with the European Union.

In cases such as this, Macro Man finds it useful to make a list of what we know....and also what we don't.  This helps to assess where we are and where some of the balances of risk may lie.

1.  The UK recently reached an agreement with the rest of the European Union that allows it avoid the EU commitment towards further integration, place some curbs on benefits paid to migrants, and affords the UK a modicum of autonomy in regulating the City.

4.  The Labour opposition officially support remaining in the EU.

5.  This referendum is essentially the raison d'etre for UKIP, the 3rd largest vote-getter in last year's general election.

6.  The latest polls currently have the "Remain" campaign with a lead as high as 10 percent.   However....

7.  UK polling has been exceptionally unreliable lately.   Pre-election polls signally failed to anticipate either the margin of victory of the "No" vote for Scottish independence or the Tory majority in the last general election.

8.  The UK currently runs a large trade deficit with the Eurozone, in contrast with a surplus with the rest of the world. 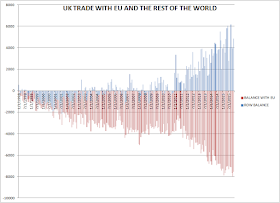 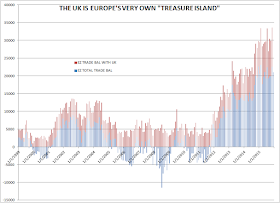 10.  The UK is the 3rd largest net contributor to the EU budget after Germany and France.

11.  The UK has generally influenced EU policy in ways thought to be favoured by markets.   Its absence could result in a vacuum filled by less (classically) liberal viewpoints.

12.  Virtually every major global financial institution has a presence in the City.   A number of them were hurt by the "jump function" action in EUR/CHF last year and are wary of being caught out by a similar gap move.

13.  If the UK votes in favour of Brexit, the government will notify the EU. at which point Article 50 of the Lisbon Treaty applies.  Article 50 is 261 words long, which is exactly half as long as this post was through the end of the previous sentence.   Essentially, the UK has two years to negotiate the terms of its new relationship with EU, during which the status quo will apply.   When either these terms have been agreed or two years have passed, whichever comes first, the UK's membership of the EU (and all benefits and obligations thereof) will cease barring a unanimous vote to extend the negotiation period.

This essentially ends what we know, and leaves a vast swathe of terra incognita for policymakers, businesses, and markets to confront.

Here's a by-no-means-conclusive list of what we don't know:

a.  The outcome of the vote.   Per point 7 above, there will probably need to be a polling margin of 10%-plus relatively close to the vote date for people to have confidence in the outcome.

b.  The outcome of the negotiations with the EU in the event of a Brexit vote.  This is really the key issue amongst a host of many.     It's nowhere near as easy as "let's just knock out a free trade agreement on the back of an envelope and be done with it."  This page from Global Counsel does a nice job of summarizing the various options, none of which are perfect...and many of which entail obligations that form part of the objections to remaining in the EU to begin with! 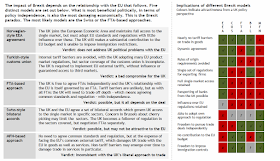 c.  Particularly, the role of the City in conducting business with EU customers will be uncertain.

d.  The timing of any new set of agreements could take a substantial amount of time.   The CEE countries negotiated for 14 years before the agreement was reached admitting them to the EU.   While this type of negotiation will clearly not take as long, that nevertheless gives you an idea of the time scales that the EU works upon.

e.  Who will fill the vacuum of the UK's contribution to the EU budget?

f.  Will the EU swing towards a more statist policy tilt if Brexit implies that economically liberal countries do not have enough votes to form a blocking minority?

g.  What sort of impact will pre- and post-Brexit uncertainty have upon financial markets and the real economy?

The most important issues fall squarely in the "things we don't know" list.   In many ways, uncertainty is the only certainty.  As such, positioning on the basis of factual post-referendum outcomes looks to be a fool's errand...hence Macro Man's reticence thus far.

That being said, there is nothing to stop us from speculating on how the market will behave in the run-up to the vote.  In particular, given the vast amount of uncertainty it seems likely that many firms with potential exposures will take a "maxi-min" approach, seeking to maximize the utility of their potential worst-case outcome.

It is for this reason that anecdotal stories have already emerged that bank option desks have been told "don't be short vol" even as they get paid out of options by corporate hedgers and speculators.   In a sense, it kind of doesn't matter what spot does....the need to not be exposed trumps everything.

We saw a micro version of this more than two decades ago, when Quebec voted on declaring independence from Canada in 1995.   The vote was too close to call, and indeed missed passing by the narrowest of margins.   As you can see, implied vols traded at a healthy premium to realized vol, particularly in the run-up to the vote. 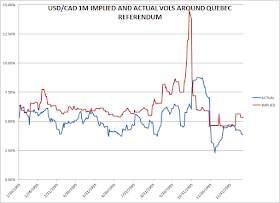 While it's true that cable vol has been bid up, it's equally the case that it doesn't seem that extreme.   After all, isn't it reasonable to expect that a fundamental UK-specific issue should engender more volatility (or at least more demand for protection) than the European crises of 2010 and 2011? 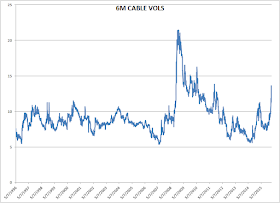 While the selling of cable likely seems overdone, it is understandable if people feel that they need to hedge- particularly into a currency outside of the whole debate.   Yes, cable is cheap on an historical basis but if people need to sell it they will continue to do so.  Given the uncertainties described above, Macro Man simply doesn't feel confident enough in others' behaviour (which is ultimately what matters in the investable horizon, not the eventual outcome) to have a strong view on cable.

He feels somewhat more strongly about EUR/GBP, on the other hand.   It's rallied more than 10% since late last year;  while the initial impetus may have been the ECB given what's happened to real rate differentials it seems clear that much of this is a Brexit premium. 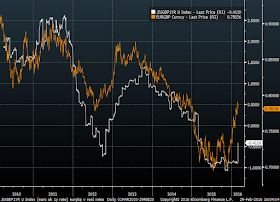 Yet from the above it seems clear that Europe may have as much to  lose from a Brexit as the UK does, and potentially more if the likes of France is able to push through a sclerotic Gallic agenda to confound the wheels of commerce.  The UK's perennial trade deficit with Europe has ballooned in the post-crisis period, representing a millstone around the neck of the British economy and a rare jewel in the rocky outcrop that is the Eurozone economy.

Yet it's not as if there isn't some potential for substitution away from Eurozone imports.   For fun, Macro Man looked at one sector in particular-autos.  In his experience, Britons have always had a rather snobby attitude towards Japanese cars, particularly relative to the rest of the world.  Perhaps its due to the viewpoint of the erstwhile cast of Top Gear, or perhaps it's a long-standing thing.  In any event, he perused Autotrader.co.uk and used the volume of cars listed as a proxy for underlying demand.  He looked at six different brands of mid-range autos of broadly comparable quality:  three Asian and three manufactured in the Eurozone.  The volumes by percentage are set out in the pie chart below; Asian autos are shaded various shades of blue, while European marques are more earth-toned: 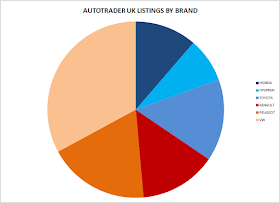 As you can see, the three European brands dominated, comprising 65% of the listings.   Macro Man sense checked this against actual 2014 sales figures, which showed the European  brands capturing 63% of the sales.  This suggests that the Autotrader listings are a reasonable proxy for general car demand by brand.

Now let's compare the same listings for the same six brands in South Africa.  Now obviously, South Africa's demographics are very different from those of the UK, though perhaps less so among those that buy and sell cars over the Internet.   Macro Man wanted to find a market that was serviced by all six brands, was outside of the Eurozone, but wasn't so close to the Asian market that the Japanese and Koreans would obviously dominate.   He would have preferred to use Russia, but the Russian site didn't provide listing totals by brand.

Anyhow, the South African results are set out below: 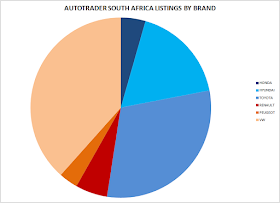 As you can see, in this case the Asian marques dominate, garnering 52% of the sales,  even though VW actually has a higher share than in the UK.  What's to stop them gaining a similar foothold in the UK, particularly if a post-Brexit negotiation turns ugly?

Obviously, this is a totally unscientific anecdotal example, but it does seem fair to observe that the French car brands (and SEAT, and Skoda, etc) punch well above their weight in the UK, and the Asians punch below theirs.  One might think that this position might come under at least some challenge in the event of a Brexit.

From Macro Man's perch, it seems likely that market participants will come to question the potential impact of a a Brexit upon the Eurozone and trade accordingly.   It is for this reason that he favours fading the recent rally in EUR/GBP as alluded to yesterday.  That the ECB might finally deliver some sugar next week is just icing on the cake.

The question of the Brexit is a vexing one, and uncertainty is the order of the day.  It's a long and winding road from now until June 23rd...and potentially for many years thereafter.  Speculators have the advantage of not having to trade until and unless they want to, and the luxury of ignoring the uncertainty if they choose to...unless it filters through to other markets, which is eminently possible.

Probably the most important advice that Macro Man can give is to know what you don't know, and trade accordingly.